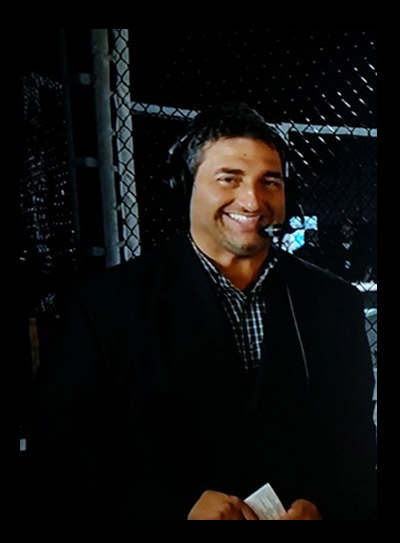 A native of Tampa, Florida and graduate of the University of South Florida, Vince is as versatile and passionate of a broadcaster as you will find anywhere. In today’s world of broadcasting where there’s no more room for one-trick ponies, Vince has utilized his diverse skills in multiple platforms and roles with tremendous success.

Currently, Vince is a Sports Talk Show Host for Knoxville’s Sports Radio WNML. He was named the station’s 2017 On-Air Personality of the Year by the cluster’s management team. He holds numerous on-air roles for the Vol Network (U. of Tennessee) including Baseball Play-By-Play Announcer/Color Analyst, Football and Basketball Pregame Reporter and Basketball Halftime Reporter. Vince is a Play-By-Play Announcer for the SEC Network’s digital platform “+” for multiple sports. He’s also the Lead Commentator/Play-By-Play Voice for Valor Fights MMA on FloCombat pay-per-view. Believe it or not, he actual does even more right now.

He’s Sports Radio WNML’s play-by-play voice of the High School Football Game of The Week, which just celebrated 30 years of presenting listeners with unmatched coverage of high school football. In addition to all his on-air work, Vince is the Website, Digital & Social Media Director for WNML and oversees sister stations, WIVK and WOKI. WNML shattered all-time records for podcast listens, app downloads, stream listening and website traffic under his direction. You name it, on and off the air, Vince has stepped in and done it well in a pinch. He is the epitome of a team player that comes with confidence, but not the huge ego.

He has an array of roles for the 60+ affiliates on the Vol Radio Network for the University of Tennessee. He’s the #2 play-by-play announcer and #1 analyst for UT baseball. He conducts the pre-game player interviews before every game for Tennessee football and men’s basketball, He has an on-site reporting role on the Vols football Kickoff Call-in Show (pre-game.) Also, Vince handles a segment of the halftime show reviewing the stats for UT men’s basketball home games. He’s also filled-in as a studio host for football post-game shows as well as men’s and women’s basketball games.

Vince is the voice of one of the Southeast’s top MMA promotions, Valor Fights. He’s the Lead Commentator (Play-By-Play) for their pay-per-view events airing nationally on FloCombat.

He’s also on the SEC Network Plus roster as Play-By-Play Announcer on their digital platform. He’s called baseball and softball games so far.

With play-by-play experience calling football, basketball, baseball, soccer, MMA and boxing, Vince has tremendous versatility. He also has the ability to call any other Olympic sport because of his work ethic to learn and his broadcasting presence and understanding of what makes a play-by-play announcer special. See those specifics here.

Vince knows the fundamentals and elements of a great sports talk show host, as well as how to construct extremely effective shows. Those details are outlined here.

He’s first-generation American born with most family in Italy, Italian was his first language. He learned English mainly in school. His first job was as a ball boy for the Cincinnati Reds Single-A affiliate, Tampa Tarpons, at the age of 13. He’s called-in sick to work just once since. That shows you his dedication and how infrequently he falls ill.

There’s so much more to know about Vince personally and professionally. See what the sports and broadcasting industry is saying about him here.

The exciting thing for him is, he’s just getting started. He’s constantly getting better, elevates his performance on the biggest stages and he’s only wired to work tirelessly to reach new levels in everything he does. He’s excited about new opportunities that are out there that he’s ultra-confident that he’d be fantastic out, like hosting a TV sports show or sideline reporter, both of which he did very well while in college in Florida. Every show and station has been positively impacted with Vince on the team. That will only continue.